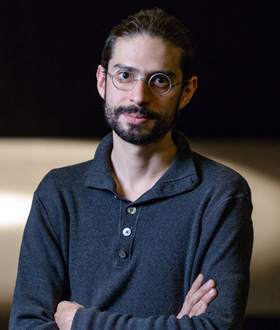 Sebastián Solórzano is a Mexican light artist. He focuses his practice on live art, lighting design and expanded cinema. He is currently researching the use of machines and light as choreographic presences to create transdisciplinary performances. Co-founder of the expanded cinema collective Luz y Fuerza, which has been creating moving image installations and live acts since 2012. As a lighting designer, he has worked at venues in North America, Europe and North Africa, and collaborated with artists such as Philip Glass, Claudio Valdés Kuri and Aladino Rivera. In 2016, he was awarded the Jóvenes Creadores FONCA grant. Student of Jennifer Tipton through the Rolex Mentor and Protégé Arts Initiative 2014–2015.

“During the residency, I want to continue the research that I started this year, in which I use my body together with lighting devices and mechanisms, for a new series of performance pieces. My goal is to delve deeper into the thinking behind and practice of expanded choreography using the presence of human, machine, sound and light bodies in front of an audience. It is also very important for me to meet other artists in order to learn from each other and to collaborate.”