The idea of in-betweenness 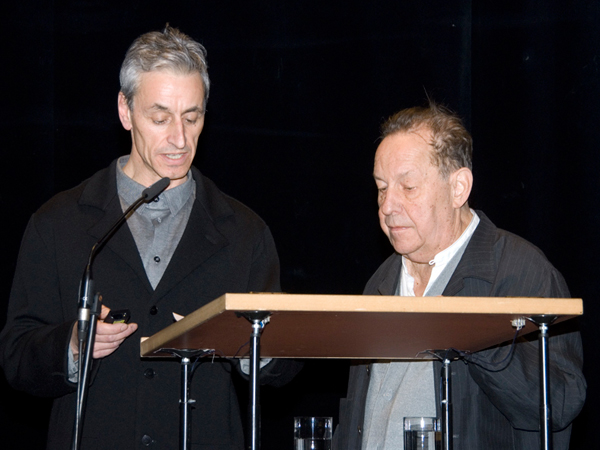 Philip Christou and Florian Beigel
Photo: Katharina Kneisel
We are still enchanted by yesterday´s poetic and manifesto-like lecture by Florian Beigel and Philip Christou from the Architecture Research Unit (ARU). Entitled Baukunst – from figure and void, the presentation took us on a journey to still life paintings by Giorgio Morandi, to traditional Korean houses but also to drawings by Agnes Martin accompanied by marvelous quotes by Bruno Taut amongst others. We would like to share in loose order some of their thoughts and words around what architecture can or should be today.

"Thinking about the idea of in-betweenness or the space between things is an alternative to the ever present concentration on the object that is increasingly part of life in the time we are living in. In these consumers' times there is a real need to reassess and be critically aware of the daily drive towards singular and self-referential object-production with an emphasis on difference that sometimes borders on the bizarre. In the interest of a generosity and communality of architectural space, architects working with emptiness and the space in-between things, need encouragement and support."

"In our views space is the essence of architecture and not the object."

"Architecture should deal with uncertainty, be a common ground for the unknown future and allow the possibility of play."

"We should think of buildings as urban figures, as ensembles, like a dancer."