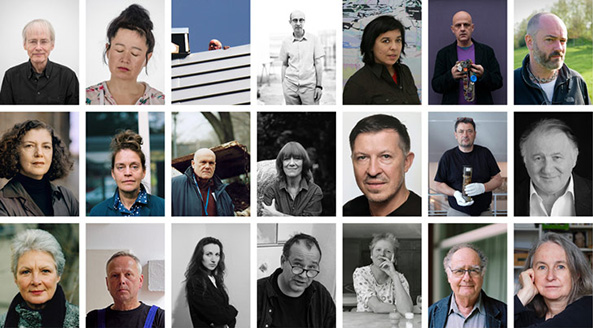 The Akademie der Künste has been awarding the Käthe Kollwitz Prize every year since 1960. Together with the Heinrich Mann Prize instituted in 1950, this is one of the Akademie’s oldest awards. In celebration of the 60th anniversary of its inception, an extensive collection of archive material comprising previously unpublished texts and images along with a small selection of sound recordings on all the prize winners from 1960 to 2020 is now available online (in German).

Käthe Kollwitz is an artist personality who bluntly exposed deficiencies in society, and especially the plight of the working class, women and families. The election of Kollwitz as a full member of the Prussian Akademie der Künste on 24 January 1919, the first woman to be honoured in this way since 1833, heralded a new phase in the history of the then 200-year-old institution. To this day, Kollwitz’s work continues to be a source of inspiration for many national and international artists. 22 April 2020 marked the 75th anniversary of her death.

The importance and influence of the Käthe Kollwitz Prize for visual artists has been rooted in the role envisaged for itself by the (East German) Akademie on its re-founding in 1950: the democratic tradition, values and goals of the Prussian Akademie between 1919 and 1933. The idea of awarding an Akademie prize to visual artists was first mentioned in the minutes of the meetings of the Visual Arts Section in October 1956. The fact that Kollwitz’s friend Otto Nagel was Akademie president from 1956 onwards very likely had a large bearing on the final decision to annually award the prize named after Käthe Kollwitz. This lasting recognition of Kollwitz’s political commitment, initiated in East Germany’s early years, has survived to this day, even through the turbulent period of the fall of the Berlin Wall and the unification of the two academies in East and West Berlin.

The first award ceremony took place in the plenary hall of the Akademie at Robert-Koch-Platz on 26 March 1960 to mark the 10th anniversary of the Deutsche Akademie der Künste in Berlin in the spirit of the “promotion of a popular realistic visual art”. The prize was awarded to Karl Erich Müller, a graphic artist from Halle, for his “active contribution to our struggle for real humanism and to our progressive art”.

Since the Käthe Kollwitz Prize was a political statement and an Akademie award by the state, personally approved by the Prime Minister, it was also subject to East German legal provisions. A critical evaluation of the policy for awarding the prize and the Section’s then self-perception as an “artistic conscience”, “as a regulator of state-controlled art life, without wishing to put its possibilities at risk”, is still lacking in research today. The Akademie will devote itself to this topic in the coming years.

In addition to honouring its recipients, the award has always been intended as a “tribute to the personality and work” of Käthe Kollwitz. Traditionally, the previous year’s laureate delivers the laudatory speech for the current prize winner. Thus, over the years, a “prize from artists for artists” has been established, and since 1993 the annually changing and independent jury has been composed of members of the Visual Arts Section. In January 2020 the conceptual artist Timm Ulrichs was awarded the prize.

The overview (in German) published online in celebration of the 60th anniversary now presents portrait photographs, biographies and short texts on the work of all 59 prize winners, as well as photographs of works and/or events still in progress. In addition, the pages on the Akademie’s Käthe Kollwitz Prize also contain the laudatory speeches, jury statements and acknowledgements as text and, in some cases, audio material. Also available is information on the personal websites, and project and archive pages of the respective artists as well as the Akademie’s member database. The new online resources also extend to a further page on the person of Käthe Kollwitz (in German) and her work at the Akademie as well as to links to collections worldwide and a summary of the history surrounding the prize’s inception (in German).