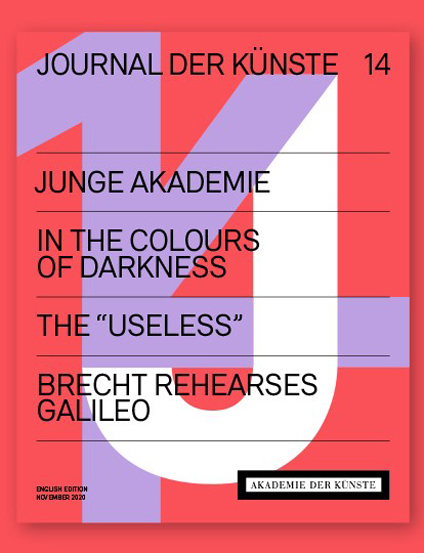 What does it mean to be “on-site” in times of the pandemic? This is a unifying question that runs through the 14th issue of the Journal der Künste.

As is evident from the manifesto of the “European Alliance of Academies”, adopted in October, “on-site” means in Europe. The increasing political control in certain countries demands action in defence of freedom of the arts and a new utilisation of the democracy-preserving effect of transnational solidarity.

For Academie member Mark Lammert, being “on-site” means being in the studio. In a conversation with Johannes Odenthal, he explores the implications of the lockdown for artistic productivity.

Ada Mukhina, fellow in the Performing Arts Section, found herself more between rather than in the cities of St. Petersburg and Berlin, describing the online editions of two theatre festivals. The focus is on improvisation and the translation of performative intimacy into the digital realm in a comparative view between East and West. The JUNGE AKADEMIE has now also created a site for itself in the digital realm: It has launched the new platform junge-akademie.adk.de, and forms one of the focuses of this issue. Its director, Clara Herrmann, concentrates on institutional self-examination struggling to make gains in freedom, create diversity and secure mobility in the face of the global asymmetry that artists are dealing with. As a concrete expression of this work, Hubertus von Amelunxen introduces us to the Algerian photographer Ferhat Bouda, recipient of the Ellen Auerbach Fellowship. The composer Kaj Duncan David outlines some fundamental thoughts on artificial intelligence and its – naïve – anthropomorphisation.

Theatre director and stage manager Stephan Suschke introduces us to audio recordings of the Galilei rehearsals from 1955, which give us new insight into the work of Brechtian theatre. With the 1979 conference of the Akademie Ost as departure point, the text by Haiko Hübner points out important background information to the current debate on right-wing extremism and anti-Semitism.

In our Carte Blanche section, we learn from Péter Nádas of the Literature Section, who began a second career as photographer, that darkness can have a much different effect than simply the absence of light.
The KUNSTWELTEN programmes, which form the second area of focus in this issue, are devoted to travel sites and travel fantasies: For the project ON MY WAY, Kerstin Hensel, along with pupils from Bitterfeld/Wolfen and Gröbzig, embarked on an exploratory tour in the footsteps of the artists Daniel Chodowiecki and Emilio Vedova. “Travels of the Mind” took place in the workshop A Very Boring Room, based on the work of Anna Seghers, while the composer and musician Annesley Black undertook percussive explorations with school classes in the form of small canoe excursions.

The Journal closes the circle with a discussion between Rainer Esser, Anne Schönharting and Jörg Brüggemann, held on the occasion of the major exhibition of the photographers’ agency Ostkreuz. “CONTINENT – In Search of Europe” examines the question: What is it that defines Europe, what unites it and what are its problems?

You can find the digital version of the 14th issue here.

The Journal der Künste is available in German and English and is free of charge. If you wish to receive the print version of a single issue or if you are interested in a subscription, please send an email to info@adk.de or use the order form here.