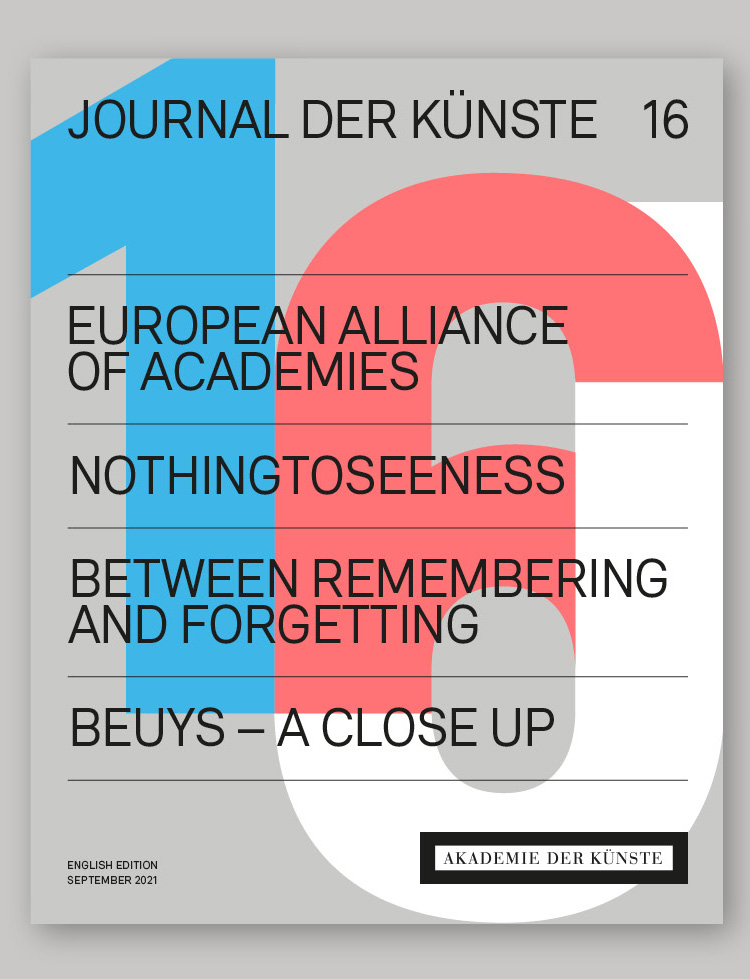 Are remembering and forgetting a pair of opposites, or can any forgetting also be a form of remembering? In the new issue of the Journal der Künste, essays by Aleida Assmann and Max Czollek on memory, art, and archives continue the "work on memory", which was initiated in the last issues. Assmann develops a theory of memory in which she assigns art the function of a monitor. Czollek, in an appeal for an archive of the present, calls for the radical diversity in contemporary culture to be better reflected in the (art) archives in order to enable a more plural view of history.
A special day in the history of the Akademie der Künste was 11 July, which marked the 325th anniversary of the founding of the artists association. Ulrike Möhlenbeck's look back shows that the Academy's history is characterized by the transformation of an educational institution into an international community of artists, by new departures and consolidation, by state intervention and the Academy’s will to manage its own affairs, as well as by controversies about art.

One focus of the issue is dedicated to the European Alliance of Academies founded by Jeanine Meerapfel last year. Its goals – defending the freedom of art and transnational solidarity against Europe-wide nationalist and anti-democratic tendencies – are also the subject of contributions by the Czech author and literary scholar Radka Denemarková and in the conversation Matthias Krupa had with Dominika Kasprowicz, director of the Villa Decius in Krakow, and the Viennese historian Philipp Ther. The contributions are flanked by the fantastic and seemingly unreal photographs of Matei Bejenaru, who documents places of industrial production and technological research in Romania.

This issue's focus is also on the new exhibition "NOTHINGTOSEENESS" – with this neologism the composer John Cage invented an equivalent for silence in the visual arts. Curated by Anke Hervol and Wulf Herzogenrath, the show—which opens at Hanseatenweg on 15 September—is devoted to the spectrum of meanings of the color white, void and silence, and presents artistic-aesthetic practices from the 1950s to the present. A contemporary contribution is the installation We Buy White Albums by the U.S. American conceptual artist Rutherford Chang, which Max Dax presents in this issue. Harald Kisiedu illuminates the role of silence, emptiness and blackness/whiteness starting from Ornette Coleman's radical album Free Jazz from 1960.

"A close up" of Joseph Beuys is offered in a new book of photographs by Michael Ruetz, commemorating the 100th anniversary of the artist’s birth, which is being introduced by Rosa von der Schulenburg. The photographs were taken in the early 1970s, when Ruetz accompanied Beuys with his camera at home, at the art academy, and during his actions, without any special assignment. This issue's Carte Blanche section goes to Arila Siegert, who was accompanied by photographer Mila Teshaieva during rehearsals for Über die Mauer after Wassily Kandinsky.

You can find the digital version of the 16th issue here.