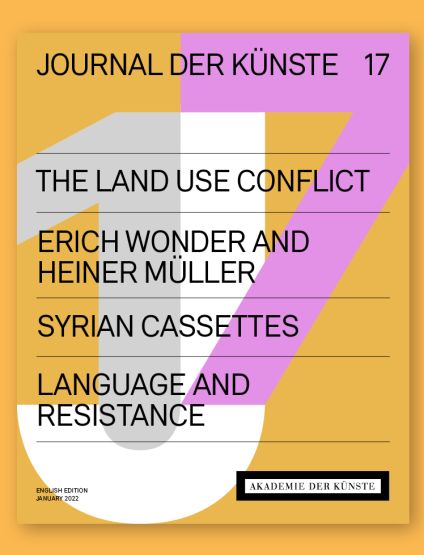 The new Journal der Künste has arrived. Just in time for the opening of the exhibition "Erich Wonder – Sets of Wonder for Heiner Müller", curator Stephan Suschke presents a portrait of the extraordinary working friendship between the stage designer and the playwright in this 17th issue.

The themes of collaboration and dialogue crop up again and again in this new issue. Kathrin Röggla talks to the newly selected Prix Goncourt winner and 2020 Berlin Fellowship holder Mohamed Mbougar Sarr about the collaboration of resisters as a key subject of his novel and the active presence of many languages in postcolonial poetry. The conversation is echoed in Meena Kandasamy's political poems, in which she overwrites Tamil Sangam poetry. In his interview, the musician and music archivist Mark Gergis recounts how his extensive collection of Syrian cassettes became documents of a past, vibrant culture that can no longer exist in situ, and how a living archive is being created in collaboration with Syrian communities. The spirit of collaboration also lives on in Roger Willemsen's recently opened archive, presented here in conversation with Insa Wilke, as well as in the film family created by Tamara Trampe. Read Cornelia Klauss's laudatory speech for the Honorary Award of the Verband Deutscher Filmkritik (German Film Critics' Association) that Trampe received in September at the Akademie der Künste. The legacy of Eslanda Cardozo Goode Robeson and Paul Robeson is commemorated in a round-table discussion in which George E. Lewis, Matana Roberts, Doreen Mende and Kira Thurman trace East Germany's ambivalent links with the US civil rights movement and anti-colonial freedom struggles, and what we can learn from the Robesons for the ongoing commitment to anti-racism and justice.

The issue opens, however, with a look at contemporary Germany. Wilfried Wang outlines the ghostly vision of 16 million single-family vacant homes as a symbol of modern consumer society – something that seems all the more dysfunctional in times of ecological crisis and land scarcity. The mood of the texts is underscored by photographs from the “Kleinstadt” (Small Town) series by Ute Mahler and Werner Mahler – the outcome of many years of collaborative photographic research. With the photographs and drawings of his Carte Blanche, Sasha Kurmaz from Kiev, the 2020 Berlin Fellowship holder in the Visual Arts Section, provocatively brings the fugitive bodies back into the picture.

In addition, Malte Giesen portrays the studio for electroacoustic music as a social space where analog and digital techniques interact and the question of collaboration with AI can be raised. The find from the archives recalls Joachim Walther's wall newspaper activities on Schönhauser Allee, the Architecture Archives present work on the restoration of Hugo Häring's architectural plans, and the Gesellschaft der Freunde (Society of Friends) of the Akademie der Künste recalls Hermann von Helmholtz's music studies.

You can find the digital version of the 17th issue here.