A Soul for Europe Conference 2019: Alliances of culture for a common European action 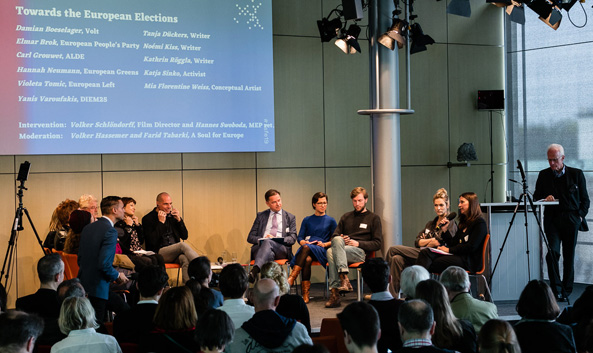 In order to make better use of the specific potential art and culture have to create encounters between people and to thus become more effective for the European project, cultural actors need to forge alliances. Like any alliance, cultural alliances rely on networking and communication, gaining their power from pooling strengths and turning dialogue into action.

This conclusion was drawn at this year's A Soul for Europe Conference, which took place at the Akademie der Künste in Berlin on 12 and 13 April, six weeks before the decisive European elections. The conference brought together leading representatives of the European political parties with artists and intellectuals from across Europe as well as actors from civil society in a multifaceted discussion and workshop programme.

In an engaged debate between representatives of the parties campaigning for the European elections and cultural stakeholders – including Yanis Varoufakis, Elmar Brok, Violeta Tomic, Hannah Neumann, Carl Grouwet and Damian Boeselager as well as writers Kathrin Röggla, Noémi Kiss and Tanja Dückers, conceptual artist Mia Florentine Weiss and activist Katja Sinko –, discussants addressed topics such as the question of centre and periphery or the role and responsibility of the arts in promoting political activism.

Jeanine Meerapfel, President of the Akademie der Künste, presented her plan to create an alliance of academies for Europe; Mike Downey, Deputy Chairman of the European Film Academy, followed by talking about the film alliance established by his organisation, which was echoed by Kathrin Deventer, Secretary General of the European Festivals Association, and by the youth theatre initiative europefiction, which, as participant Rabea Porsch described, connects the German Ruhr region with various European countries.

This year's conference opened on Friday night with the awarding of the 2019 Evens Arts Prizen to choreographer Eszter Salamon. When asked to describe her way of working, Salamon focused on the dialogic aspect, saying that she felt movement was not enough and that she rather had to create encounters.

Creating and facilitating encounters in an attempt to boost dialogue were also underlying themes of ten workshops hosted by a range of civil-society organisations and individuals. Dealing, among other topics, with the importance of women for European policies, with spaces for assemblies or with culture and well-being, and presenting strategies to foster direct communication between citizens or to activate Europeans for the upcoming elections, the conference's workshop programme demonstrated the broad spectrum of existing initiatives that invite citizens to become active for Europe and gave those initiatives an opportunity to connect with each other.

Throughout the conference, the façade of the Akademie der Künste displayed a collection of posters for the “Vote together” campaign by artist Wolfgang Tillmans, calling to vote in the May elections in all European languages.

Further information on the conference and a video recording of the Saturday morning panels can be found at www.asoulforeurope.eu and via #asfe19. 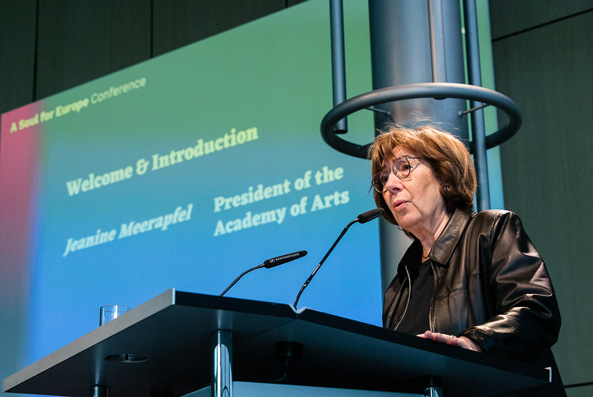